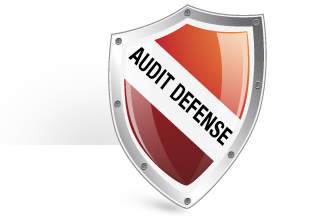 The IRS routinely reviews accuracy of tax returns and anyone’s return can be analyzed sooner or later, it’s a random process. If you receive a notice that your tax returns will be audited, do not panic but educate yourself about on the entire process. An audit notice doesn’t necessarily mean that the IRS found something very wrong with your return; many times it’s a simple error in entering a Social Security number or a date of birth that can trigger the audit. One way or another, the IRS wants answers to some questions that your returns raised.

You can take on answering the IRS questions by yourself or purchase Audit Defense, a service offered by TaxResources, one of the biggest income tax audit defense company in the U.S. This service relieves you from ever dealing with the IRS and can handle for you the following:

Audit Defense cost is additional to the tax preparation software and must be purchased before you receive an audit notice for a timely filed income tax return.

TurboTax products have some free built in features that can help you assess audit likelihood, what to expect, and how to proceed. When you finish you tax return, TurboTax checks it for common audit triggers and displays results on Audit Risk Meter. Remember that even if the meter shows a low risk of audit, it does not guarantee your return won’t be audited.

The software also offers guidance on what to expect in case of an audit, questions you may be asked, and who to contact. Finally, Audit Support Guarantee, offers free year-round guidance from a tax professional who will answer all the questions you may have, and who will assist you in getting ready for an audit.

So is this extra protection worth the cost? Well, for the average tax payer with a simple tax return, we believe this might not be necessary.  However, for those small business owners with large deductions, losses, or complex returns, this service can be well worth the extra costs.