New tax brackets have been released for income earned in calendar year 2019 for taxes due on April 15th. In 2020 that day falls on Wednesday.

By releasing the tax brackets at this time, the IRS is giving the taxpayers roughly 6 weeks to make last minute adjustments to income and expenditures. It also allows an early peak into what to expect when filing.

Brackets appear to have increased along with the inflation rate (perhaps slightly higher). The brackets tend to expend faster with each consecutive tax bracket. The lowest tax bracket (at 10%) expended by 1.84% across all filing categories; the highest bracket (37%) expended by 2.06%.

Because of the progressive nature of the U.S. tax system, the income is taxed at different rates, depending on the bracket is fall into.
For example, a taxpayer filling as “Single” who makes $60,000, will have its income taxes in three different brackets: 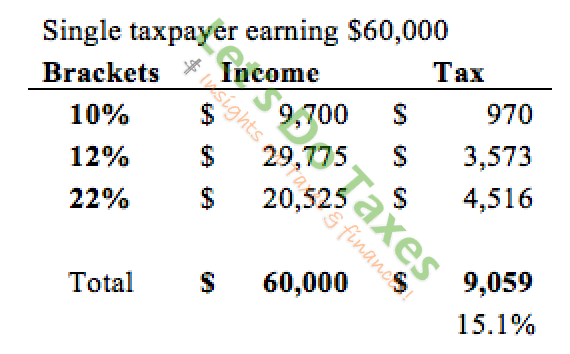 The final tax amount will determine your effective tax rate. That rate for the taxpayer mentioned above is 15.1% despite the fact that the income falls into different tax brackets.