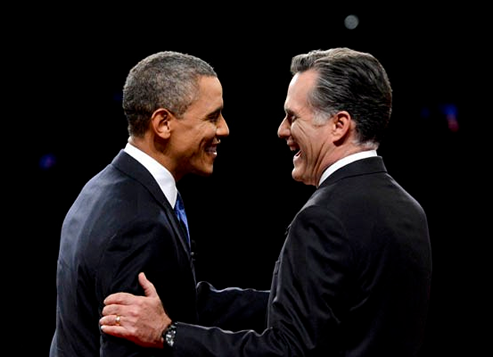 The 2012 presidential elections are just weeks away, so I wanted to know how do I stack up against the President and the Republican nominee Mitt Romney (and their running partners) when it comes to taxes. Political issues aside, I’m curious how an average citizen, the role I will assume today, compares to the most influential and powerful people in the country.

Here are some tables I compiled based on publicly available data: 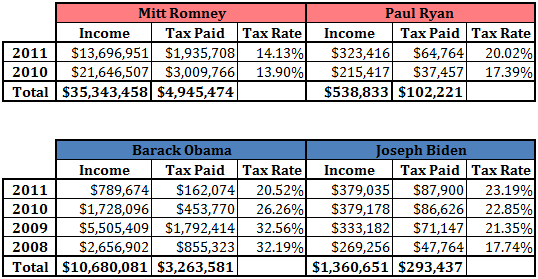 Just note that all the above returns were filed “Married, filing jointly”.

By looking at the above tax returns data, there is one that is the most “entertaining” to review. The clear winner is this category is Mitt Romney.

And few details from the President Obama’s return:

So who’s to gain / lose from becoming the next president?

2011 tax rates ranged from 10% to 35% and arguably all four individuals fell into relatively low bracket. Based on the information publicly available, I think that Mitt Romney has the most to lose, in economic terms, if he is elected the next president. The presidential salary would be a minuscule increase to his current income and would potentially prevent him from serving the executive functions and diminish his sources of income from those activities. Naturally, nobody seeks to become the president for the money and a chance to become a very influential figure in American history is priceless.

The numbers show that the job as a president is not the most lucrative one. The President Obama, if re-elected, is facing another four years of sub-$400,000 salary and as time has shown, he can expect less time being devoted to writing. That portion of his income was well over 50% of what his family earned in the recent past, so the job as the president has plethora of “perks”, none of which if financial.
Where does it leave me?

The most obvious observation based on the above tables is that I pay more in taxes that Mitt Romney and my income doesn’t fall anywhere near what Mr. Romney makes. On the flip side I have to admit that it’s honorable that he shares significant portion of his wealth in form of donations.

The final conclusion is that tax law is very tortuous and having a good accountant is very important. It requires knowledge and skill to maneuver through the rules and regulations and put together 379 pages of information. Diversifying one’s activities and educating yourself on pros and cons on each of them (from tax stand point) can deliver almost improbable results. Tax deadline is only 6 months away. It’s time to get prepared.