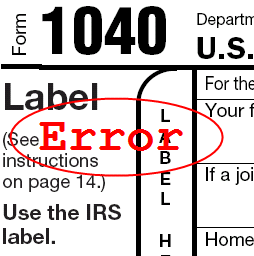 Today I came across an article posted by the U.S. Government Accountability Office, which conducted a study of accuracy of the tax returns prepared by paid professionals. Although the study is limited in its scope, it found significant errors made by the tax professionals and great discrepancy in the amount of refund taxpayers would receive.

Although the numbers of mistakes made by paid preparers was wide, the following errors occurred most often:

IRS’s National Research Program collected data from 2006 to 2009 on accuracy of the filed returns. The results showed that both individuals preparing taxes independently as well as paid preparers make errors when generating tax returns. Surprisingly more errors related to refund amount (or amount owed to the IRS) were made by paid preparers: 60% of the prepared returns versus 50% prepared by taxpayers themselves.

Government Accountability Office conducted the study because a significant portion of tax returns is still prepared by the tax professionals. For 2011 that represented over 81 million returns (56% of 145 million received) and if roughly a 60% of those returns are problematic, the IRS has a reason to believe that close to 49 million tax payers get benefitted or leave money on the table. Another way to look at it is that 49 million reports may be red flagged for an audit.

As of today the IRS lacks the power to regulate paid tax preparer’s industry. A potential legislation would create certain standards and educational requirements necessary to operate a business. It would also require a registration and greater oversight and scrutiny of businesses flagged by the IRS.